Well the sun eventually came out, after a slightly gloomy start, to greet schools for the Year 3&4 and Year 5&6 Quad Kids Finals at SPortspark Athletics Track on  June. 20. Schools brought teams of 5 boys and 5 girls to compete in 4 different events – a 75m sprint, a longer 600m run, a vortex howler throw, a standing long jump.

Schools were gathered together for the mornings welcome and competition briefing at which our Local Special Guest & School Games Ambassador for the day, Iona Lake, was introduced to the children. Iona Lake made her Commonwealth Games debut in Australia back in April. She joined the other athletes in Team England’s athletics squad to compete at the Carrara Stadium in the 3,000m steeplechase. She is currently coached by Pauline Ash at the City of Norwich Athletics Club . Iona will be back with the School Games team tomorrow for some Secondary Athletics action. 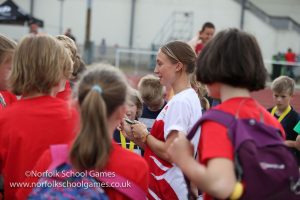 The children were then split into 8 groups and rotated around the 4 activities collecting points for their school as a team.

There were many excellent performances with lots of smiles and cheers throughout the day. Many parents and spectators were able to come and support which added to the atmosphere of the day. 150 children took part overall with all scores then being recorded on a spreadsheet. Sincere thanks goes to everyone who helped at this event for their sheer dedication and hard work, without the teamwork on show today we would not be able to deliver such a fantastic event.

As the days schedule was running ahead of time we were also able to fit in some fun, non scoring, shuttle run relays for the teams. This was a fun filled way of ending the first ever Norfolk School Games Quadkids event on a high.

Congratulations to those children who were nominated and were then awarded with a Sportsmanship Certificate in our end of the day presentation. There was a lot of teamwork, positives attitudes and great sportsmanship on show throughout the day.

The photos taken by our professional photographer can be viewed and bought through the photos page on our website . They will be uploaded by the end of the day.

If you loved our Quadkids event but are not part of an athletics club then go to our clubs page to find our more information about local clubs in your area.